Tabaco, Philippines – 13-18 February 2017. In preparation for the first profession, the novices of the Brothers of Charity in Tabaco, the Philippines, attended a retreat on the charism of Father Triest.

Over the course of five days, Bro. René Stockman, Superior General of the Brothers of Charity, taught 40 novices about the Founder’s charism. At the end of the retreat, 17 novices professed their first vows, including 11 novices from Asia and 6 from Africa. 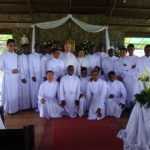 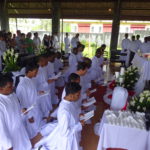