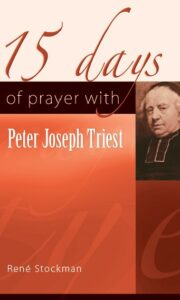 Peter Joseph Triest was a man who was deeply committed to devoting his life to the care of the poor and the sick. Everything was rooted in God’s love for him. He considered charity to be a triad of love, compassion, and real commitment. He always tried to take care of people in their entirety and succeeded in giving them new hope.

All these elements that were so typical of Father Triest and that still make him relevant today are highlighted in 15 meditations, each starting from a passage from his many conferences and sermons.

These reflections can be a source of inspiration to go with more love to those who are deprived of it, and to remember to draw from the true source of love, God.

The book has been published in three languages: in English by New City Press, in French by Nouvelle Cité, and in Dutch by Betsaida. This publication will be part of the impressive 15 Days of Prayer series from both the English and French publishers.

Order your copy directly from the publishers, from the General Administration’s Secretariat using this link, or at the bottom of this page.