A Walk Through the Life of Peter Joseph Triest 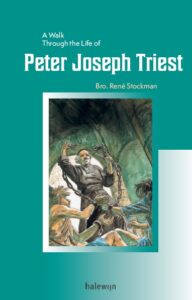 In this book, Brother René Stockman, Superior General of the Brothers of Charity, approaches the figure of Peter Joseph Triest, founder of four congregations, from a narrative perspective. The historical facts remain the basis of the storyline, but they have been embellished with pigments and flavourings. The author has added conversations and descriptions that may not have taken place in a literal sense, but which allow the reader to immerse themselves in the various situations of life in which Triest found himself. After all, by spending years exploring Father Triest’s life story and drawing spiritual nourishment from the many texts he left behind, Brother Stockman feels he has come to know Triest quite well as a person.

The story is not meant to dwell on the past, but is an invitation to take something away from it for our own lives today.

Order your copy directly from the publishers, from the General Administration’s Secretariat using this link, or at the bottom of this page.